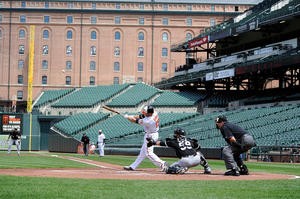 Professionally organized baseball has been around for 130 years now; through thick and thin. Despite any rough times the country has gone through, there has never been a game closed to the public; until today. On Wednesday, April, 29, 2015, the game between the Chicago White Sox and the Baltimore Orioles at Camden Yards was closed to the public in result of protecting fans from potential threats of the recent riots. So, what does this mean for the fans, and how does it affect the revenue of the Baltimore Orioles? The fans can exchange their tickets for any other home game of the remainder of the season. Yes, some fans may understand the reason for the closure, but some may not. For those who may not, the attendance for possibly up to a month, may be negatively affected, resulting in obvious drop of cash flow from the concessions and merchandise. After picking up all of the pieces to the mess, potential affect of the team salary could result in not being able to trade for or sign a higher priced player(s); especially when the O’s are middle of the road in payroll already. This historical event will be looked upon in the future as an example of how to handle a similar situation in all aspects.