Wrigley Field is just over 100 years old and sure shows it’s age, so it hardily has any modern era twists, which makes it unique and true to baseball history. Despite the game adapting to the new modern styles and young fans, the game still needs to be preserved, so when the true fan who respects baseball as America’s past time, walks into Wrigley Field, it’s a breath of fresh air. Yes, Wrigley Field has several areas of the stadium that are decrepit, and several parts that are awkward/odd, but walking around Wrigley Field makes one feel as if they just took a time machine back to the mid 1900’s. 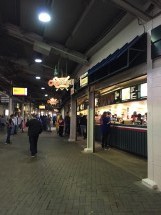 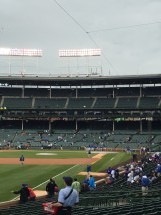 Of course being right in the middle of one of the oldest historical large US cities helps bring out the vintage rundown look, but the stadium on the outside perfectly spells famous antique. Wrigley’s exterior look brings back memories of famous stadiums such as Yankee Stadium, Ebbets Field, Crosley Field, etc; the style that Yankee Stadium 1 revolutionized. As it is one of the historical stadiums, the concourse with concessions is underneath the seats with tunnels that lead up to the field, just like Ebbets and Polo Grounds did, for example. The old columns are of course in the stands to hold up the balcony levels. The flags around the top of the stadium roofs are iconic as well as the old scoreboard in centerfield. It all should give one chills and great memories of when baseball was flourishing as the National Past Time. However, failing to upgrade/renovate enough up to the modern style to appeal to a broader variety of fans is a problem.

No major renovations had been done from 1970-2005, but finally they got to it. Since 05’, the outfield has been expanded with more bleachers, two large jumbotrons, and a new field. The bleachers off of the rooftops that are not technically part of the stadium is part of the reason why Wrigley brings back the history of the game so well. However, the popular things that need to be done to make Wrigley adapt better to the new modern style is to make the concourse a wrap around, add some restaurants/bars (in the outfield), and update the concession menus to have a better variety of selections rather than just dogs and cheap beer. More tiny additions can be done as well, but in conclusion, Wrigley Field is way behind in stadium upgrades, therefore not being able to appeal to a better mixture of fans. However, the sensation a fan should experience from the historical atmosphere is worth it, as Wrigley Field well represents the History of the game. Overall grade is a B-