Since the opening of Camden Yards in Baltimore, most teams have followed suit in building new state of the art venues with the modern look to appeal to the 21st century fans. One of those franchises is the Milwaukee Brewers who opened their spectacular indoor/outdoor super dome in 2001. The most challenging part of constructing a modern style park is keeping the morality of the national past time in tact, meaning giving the stadium a slight flavor of history to stir in with the new era. Miller Park is an outstanding modern style stadium, but lacks the national past time vibe despite memorabilia in different areas of the park. 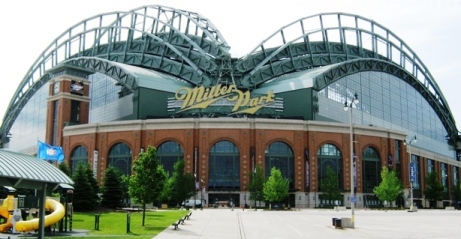 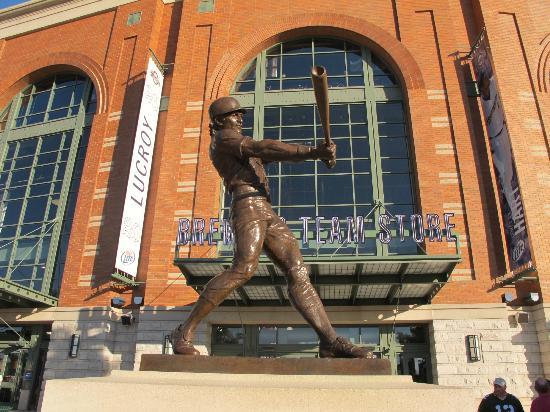 The front of the stadium features a fantastic statue of Robin Yount and a few plagues of other historical players in Milwaukee history. Inside of the venue there is a symbolical Milwaukee baseball Hall of Fame wall and of course retired numbers around the field, but other than that, the stylish modern look with all the unique bars, concessions, and and extra features (ex: slide in left field) are overwhelming only to a point where they tune out any vibe of preserving baseball history. Other than that, Miller Park’s gigantic super dome is huge and fantastic with tons of unique features on the concourse, but the setup of the concessions is confusing. 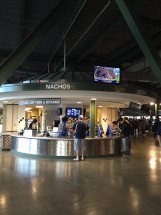 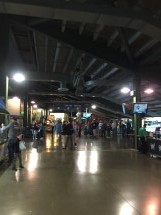 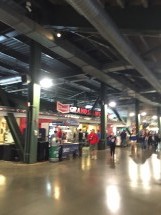 It seems that most parks have a specific setup for the concessions such as having them backed up against the wall with portables on the outside of the concourse, but Miller Park is a mixture. The concessions themselves serve a great variety and there is an intriguing TGIF restaurant down the left field line overlooking the stadium, which is arguably the best of the modern stadium restaurants, but the lack of choices for beer is disappointing. Milwaukee is known for it’s microbreweries other than being one of the homes to Miller, so the lack of options from the local breweries is a big negative, as dogs and beer helps define the national past time.

Overall, Miller Park is extremely clean and has a huge welcoming feeling. When arriving at the stadium (on the outskirts of downtown) one may have low expectations as the area is not exactly a vacation destination, so once inside it is like walking into a huge multimedia venue with baseball as the centerpiece. The way technology is taking over in the 21st century, including changing the look of sports stadiums, Miller Park is ahead of the curve, and should be the model for the future of baseball stadiums. Even during a year like this season when the Brewers are horrible, the magnitude of the stadiums entertainment makes the game a lot more enjoyable. However, because baseball is such a big part of America’s history, it is disappointing that the Brewers were not able to find a way to bring it into play without draining it out with the large modern style presentation. Miller Park gets a grade of a B+.