Despite the major leagues presenting the grandest of ball parks, Harbor Park in Norfolk, VA is of major league caliber just like the many players on the Tides’ squad. The home of the Norfolk Tides (Triple A of Baltimore Orioles) is 24-years-old, but still looks brand new. It may only hold 11,500, but is very roomy including a picnic area in left field and a party deck in the right field corner. There may be a lack of extra circular activities/details other than the game, but that is the beauty of Harbor Park; it keeps the fans eyes on the field. 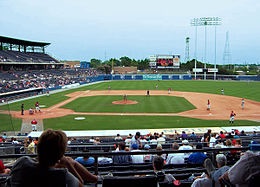 The concourse is not overloaded with concessions, however there is a great variety of it to have good choices for all members of a family. Beer and hot dogs are the name of the game for baseball and Harbor Park has a signature hot dog bar and several beer stands with local breweries. But, in the end, the game can be seen and enjoyed from the concession stands.

The outside of the stadium is very welcoming and stands grand. Driving on the freeway right next to the stadium makes one want to go and visit it up close. The stadium has many different aspects of it, such as a great upper deck and suites, along with the already mentioned picnic tables and right field pavilion. The whole atmosphere is unique and warm. The promotional games in between innings are entertaining for the whole family. Overall though, what makes Harbor Park great, is that it keeps all fans’ eyes on the game, which allows them to watch the game’s next superstars develop into future big leaguers, which makes for a great story down the road when a fan sees a young superstar in the bigs who they may have watched play years earlier at Harbor Park. Overall grade is an A. 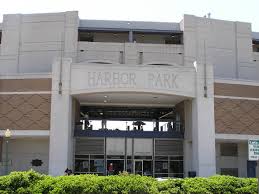 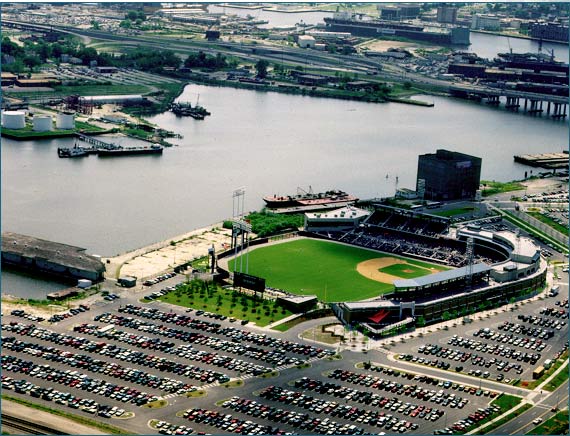