New York City is home to two storied baseball franchises, who both moved into their new state of the art venues in the beginning of the 2009 season. Since, both stadiums have received much praise, as the new venues have joined the MLB’s family of modernized stadiums. Just as before, both stadiums are on opposite sides of New York, however they both offer different styles and vibes. Each team may have a different relationship with major league baseball, but both were deserving of new homes, as Shea Stadium and old Yankee Stadium were decrypted. Both franchises had a different vision for their team’s new stadium, as the Yankees wanted to remake Yankee Stadium, but add a modern touch, and the Mets wanted to keep baseball history rich by not over-modernizing.

The new Yankee Stadium was a $2.3 billion project that took the shape of the old venue, and made it better, modernized, as it was built right across the street from “The House that Ruth Built.” After the demolition and movement of memories to across the road, three minor league ball fields were built so that the hopeful future Yankees would have a place to play, while looking up at their dreams, literally.

Once inside of Yankee Stadium, one can see that the concourse follows all the way around the field like most new stadiums. As one walks along they can see all the new fancy clubs and specialized concession stands, but can still feel the presence of baseball history with banners hung up and pictures on the walls of legends who played before. Monument Park is still there, but in a different location, in centerfield below a big restaurant. Left-center field is home to the retired numbers of Yankees greats, however, fans have to walk underneath and through a hallowed hallway to reach the steps that lead upwards to the outfield concourse, which is just very awkward. The idea of the history of the game still being present is being able to feel the history and watch the game from everywhere, as if one was on the field, which is what Citi Field does extremely well.

Out of all the great new baseball parks, Citi Field may feel the largest, especially when on the outside.

The great thing about baseball stadiums back in the day was the feeling of how grand they were. To step into the big house and see the boys of summer play the nation’s game. That is Citi Field’s image, and although it may not be quite a history book inside of the venue, it has to catch up to time in some way. The irony in the similarity between Ebbets Field and Citi Field is not just in the looks, but the way that the Mets organization feels connected to Jackie Robinson. When the Mets formed back in 1962, most former Brooklyn Dodger fans still living in the big apple became Mets fans, thus being big Jackie fans, so started the Mets everlasting connection to Robinson. The main entrance is basically a slap in the face of Jackie Robinson with a major tribute to him. 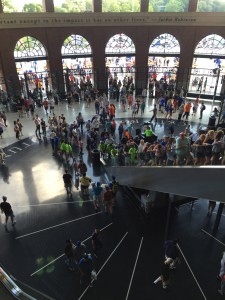 Citi Field of course offers a full wrap around concourse, yet it feels smaller from the inside, as fans feel like they are closer to home plate than they actually are. The shape of the concessions and stands are funky in some parts, but that is what it was like with old parks, including miscellaneous polls and iron barring’s holding history up. 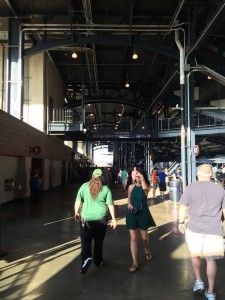 The outer edges are modernized with great food selections and clubs and what not, but all in all Citi Field is an A+, and don’t forget to check out the Mets Hall of Fame right inside the main entrance. 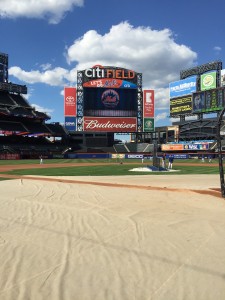 Yankee Stadium may have over done it with modernizing, but all in all the history is still there and they did a great job with modeling it after the old place, however it’s grade of a B- can’t compare with Citi Field.